This summer, Groundwork Somerville was invited by Groundwork USA and the National Park Service to be part of the Youth Conservation Corps at Yellowstone National Park during the last week of August. Our Green Team Coordinator and two Green Team members attended, along with youth and youth workers from nine Groundwork trusts nationwide. Together and in teams, we installed 400 lb bear boxes, swept gravel out of natural geyser downspouts, and built trails. During the off hours we hiked to the peaks of mountains where the sun set beyond the Idaho border, investigated microbial life around geysers, learned about the repopulation of wolves in the park, camped with Bison, and dipped into a confluence of the boiling river.

At Yellowstone National Park, the wildlife determined the way we moved through the land, and the land determined the volume of our movements. We drove slowly around blind corners, cautiously next to herds of Bison feeding on the sides of the roads, and quietly as we looked through binoculars to see young wolves playing in the grass beyond earshot. We tread softly on the silica coated earthen downspouts of the geysers, while working to remove gravel, as to prevent the destruction of radiant microbial life. The land revealed glacial erratic movements from millions of years ago as we witnessed large boulders strewn and still across a meadow. We felt the heat of the last super volcano 640,000 years ago under foot and in our faces as mud pots, hot springs, geysers, and fumaroles released steam and mist that wandered airborne into our bones.  On the night of our camping trip to Nez Perce, a park services campground, we released from the muted silence of felled trees and the creaks and hums of insects in heat with our own sounds- all of the worst and best pop songs of each generation since Aretha Franklin, sung cathartically in a cabin while it rained. Each trust from around the country took a turn to sing one line, followed by a chorus of 30 to finish each song.

The physical work we completed throughout the week, the learning and expanding of our experience that took place while the National Park Service gave us a tour through history, and the bond we cultivated, so clearly represented Groundwork’s mission for all of our communities, in all of our different manifestations, around the country: To bring about the sustained improvement and regeneration of the physical environment and to promote health and well-being through community-based partnerships and action. At Yellowstone, we found ourselves closer to our work, ourselves, and each other. 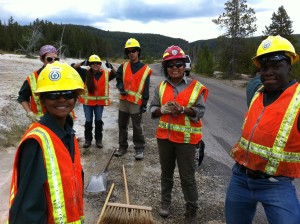 Working next to the geysers! 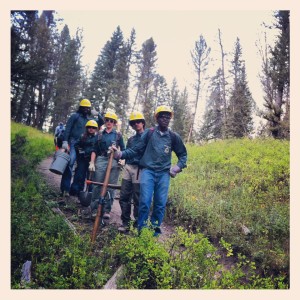 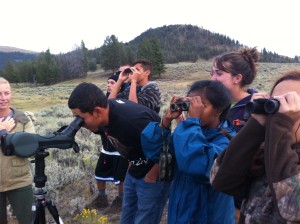 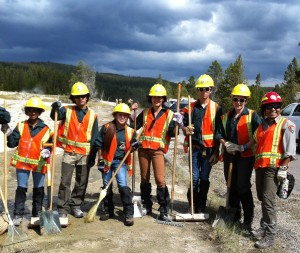 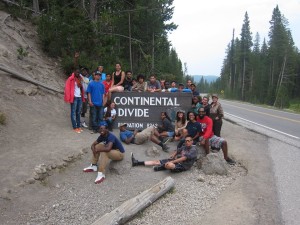 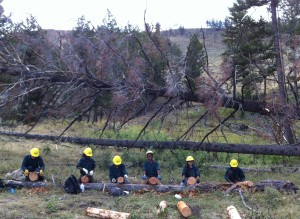