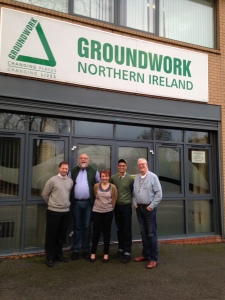 In May 2014, Groundwork Somerville hosted Ciaran Shannon, the Head of Policy and Good Relations at Groundwork Northern Ireland for three weeks at our office, showing him our work, bring him to local meetings, work days, garden classes and more to learn about how Groundwork Somerville gets work done. He was one of 13 people from Northern Ireland and Ireland to come to the US as a part of Boston College’s Irish Institute’s “Rule of Law” Exchange Program. Lawyers, police, politicians and youth workers arrived together and were hosted all over the Boston area to compare and contrast our countries successes and challenges in our common goals.

Luckily for us, this was an exchange program, and from November 8-18, I was invited to travel back to Ireland and Northern Ireland to see their work first hand. As many people know, the Groundwork UK network predates Groundwork USA, and was the inspiration for the National Park Service and EPA Brownfields Program to bring the concept to the United States, so this was truly a unique opportunity to learn about our roots and see the work first hand. 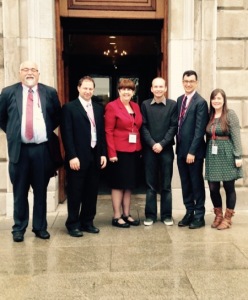 The American travelers with host Ashling Golden (far right) and TD Paul Murphy (third from right) of the Anti-Austerity Alliance in front of the Dáil in Dublin.

Along with Mary Sullivan from the Attorney General’s office, Josh Krintzman from the Senate Counsel, and Ed Norton from the Maritime Apprentice Program (all hosts of the exchange back in May), I traveled first to Dublin and then to Belfast to experience the “rule of law” in all its forms. From meeting with political leaders at the Dáil (parliament) one day, to touring a community policing station and sitting in with a pro bono legal nonprofit the next, we were given an inside look at how the Republic of Ireland keeps itself running. Two big differences we noticed were that there are four major political parties (FOUR!) and the fact that the police guard take an active role in diverting potential offenders out of the legal system, rather than simply enforcing and arresting and leaving it up to the courts. 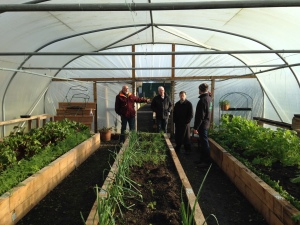 In the greenhouse at one of GNIs community gardens

But the heart of my trip lay up north in Belfast. Spending two days with Ciaran and Groundwork Northern Ireland led to some sobering realizations about the work we do here in Massachusetts, as well as the great potential we have to effect change. On the face of things, Groundwork Somerville and Groundwork Northern Ireland are performing some very similar jobs creating green spaces in urban areas, engaging community in public processes and creating jobs and training opportunities for youth. However, Groundwork Northern Ireland is performing this work in a city that until just 10 years ago (or even less) was regularly rocked by extreme violence. To this day, some groups are still trying to destabilize the peace that has been created, and which Groundwork Northern Ireland strives every day to preserve and increase. Ciaran and his colleagues target “interfaces”, or streets and locations at the juncture of Loyalist and Nationalist neighborhoods, to do their work, which includes building community gardens (allotments), taking down “Peace Walls” and bringing Catholics and Protestants together to talk about their hopes for the future. 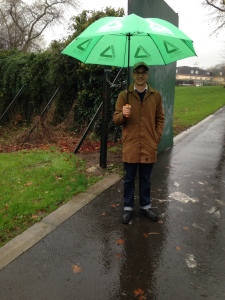 Despite these efforts, their murals regularly get painted over by political factions, and there are some neighborhoods that some Groundwork employees simply don’t feel safe walking into because of their backgrounds.

Though Somerville has its struggles, we are lucky in that our city has not been the site of a literal battleground. We have many groups of people in Somerville, some disenfranchised, and with great tension between others, but seeing the work of Groundwork Northern Ireland gives me great hope for our ability to bring our diverse city together and find common interests through our work creating a sustainable environment, green and growing spaces, and new jobs for young people. 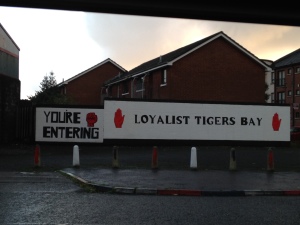 Our new goal now is to find a way to continue this exchange between Groundwork’s by bringing our Green Team’s back and forth between Somerville and Dublin!

Please keep coming back to our blog as I explore more specific parts of Dublin and Belfast seen on our trip. But I hope this gives an interesting overview into the experience.