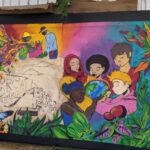 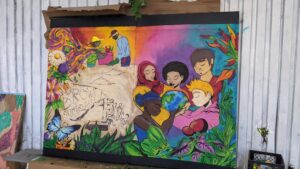 Thank you to the Somerville Times and Jessica Sisavath for writing about our Somerville Arts Council-funded mural!  Full article follows:

Darron Fernandes-Smith, Junior at Massachusetts College of Art and Design helped sketched the outline of the mural with the help of Saldin (Sal) Islam, a Board Member of the Groundwork Somerville who received and organized the responses from the community. Groundwork Somerville Youth Program Green Team members, volunteers, and families participated in building and spray painting the mural during the ArtBeat week, making this a community effort.

With the image of the farmers with masks, Fernandes-Smith says, “We saw the perseverance, despite that everything is going on, we as a community can still help the community.” As Fernandes-Smith read the input from the community, he helped direct the mural’s message of a safe space, what’s good for the environment such as recycling, and diversity. The responses overall represented the strength and safety of South Street Farm.

“This year we wanted to honor the Black Lives Matter movement. Groundwork Somerville also wanted to highlight what we always stood for which is its immigrant farmers,” says Islam. The mural includes world crops, jilo, bitter melon, okra, maxixe, cucumbers, bird peppers, epizote, heirba mora, calaloo, lalloo, collards, Vietnamese spinach, Asian long beans, pursalne, and culantro. As kids and families helped paint the mural, they were able to learn more about these world crops that are grown at South Street Farm. The farm is actively working with the Mobile Farmers Market to help provide these world crops to Somerville and the surrounding communities.

Yairamar Oropeza, a member of the Groundwork Somerville Green Team, says “I think this is a good way to unite the community during this difficult time in the middle of a pandemic.”

Lauren Sullivan, volunteer at South Street Farm says “I have a lot of interest in sustainable living. I’m trying to learn about regenerative agriculture and ways to feed people in an environmentally sound and equitable way. Learning about where the food comes from is the first step in that chain.”

In response to caring for the climate, Yulia Bulgakova from the community says, “We can try not to litter, recycle and know we are all in this together.”

In response to urban green space, Ray Gao from the community says, “An urban green space to me is a place where from all different backgrounds can get together and hangout, creating a reprieve from the corporate culture of America where there is a peaceful space.”

On the right side of the mural, the different races of the mentor farmers are represented holding onto an image of the earth. Islam says they’re “guiding what the world is going to become.” It also embodies the active support and opportunities that the Groundwork Somerville provides to the youth and community throughout the year. This year Groundwork Somerville celebrates their 20th anniversary along and their new mural created during ArtBeat week.

To see more about Somerville happenings, visit the Somerville Times Website: https://www.thesomervilletimes.com/archives/101622 (apologies for the un-hyperlinked article. Our website is acting funky!)